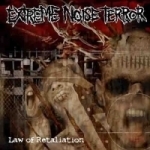 I admit it. I’ve never listened to EXTREME NOISE TERROR before. Sure, I’ve heard them mentioned alongside Napalm Death and Terrorizer as originators of the Crust / Grind sound during the mid to late 80s. I’m also aware that their album “Holocaust In Your Head” is considered a genre classic. My sources show this is their first disc in 7 years and there are 2 original members currently in the band; Phil Vane and Dean Jones. Both guys take turns singing or um shouting and growling what are supposedly political lyrics but I couldn’t understand a thing. No matter as 20 tracks speed by in 38 minutes offering exactly what I expected; pounding, loud, angry music! If these guys haven’t changed their formula in 20 years then I can certainly hear why they’re considered so groundbreaking. They have the energy and passion of Napalm Death, have sped things up just a bit, added a second growler for a more intense sound, and flirt with a Discharge-esque Hardcore / Punk racket. Extreme Noise Terror faithfully live up to their name and “Law Of Retaliation” is no exception. www.extremenoiseterror.co.uk, www.myspace.com/extremenoiseterroruk, www.osmoseproductions.com