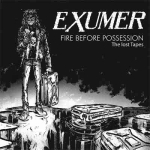 It should be no secret that the German Thrash scene of the 1980s consisted of more than the (meanwhile) so called “Teutonic Big 4”. Besides the big names, there was a second line of very good bands like DEATHROW, DARKNESS, ASSASSIN or EXUMER who reached a little bit of attention as well. These bands released two or three albums before splitting up due to manyfold reasons. Some of them re-united in the last years, like the Frankfurt based band EXUMER. These guys released their furious debut album “Possessed By Fire” in 1986, which is a true classic masterpiece of the genre. The follow-up (and temporary swan song) “Rising From The Sea” a year later was a lot more influenced by contemporary US Thrash records and a short while after the retreat of their label Disaster, the band split up. In the meantime they are back again, with a rather new album and two remaining original members. And the wave of re-releases reached EXUMER as well. High Roller made both albums of the band available on CD and vinyl again as well as they released this album with old recordings. “Fire Before Possession: The Lost Tapes” was recorded as an advance tape for the first album and is up to now only known to the original label and the band itself. And what do we get here? Eight out of nine songs from the album “Possessed By Fire” (only ‘Sorrows Of The Judgement’ is missing here) in earlier, imperfect versions. If you don’t know the album yet, these recordings can only give you a hint on the quality of “Possessed By Fire”. If you haven’t by now and want to listen to a real gem of German Thrash, get yourself a copy of the original album first. If you already know “Possessed By Fire”, you might listen to “Fire Before Possession: The Lost Tapes”, just to find out how classic tunes like ‘Xiron Darkstar’, ‘Fallen Saint’ or ‘Destructive Solution’ sounded in earlier, unfinished versions. As for me, I might never listen to this album again, since I grew up loving the original album. To find out more about EXUMER, check out www.facebook.com/exumerofficial. For one of the most dedicated vinyl labels ever, visit www.hrrecords.de or www.facebook.com/pages/high-roller-records/137170149638274