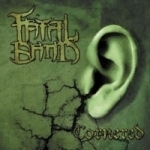 Brutal and modern sounding Death Metal from Moscow, Russia. That’s what this 4-piece act called FATAL BAND represents from start to finish. FATAL BAND also seem to be keen on churning their stuff out by using pretty unorthodox and experimental solutions for their song structures that obviously tend to confuse some listeners (like me for example). At times some of those more experimental and unorthodox song structures do work alright – partly at least, but then again, a big part of them are somewhat unnecessary and even pretty failed attempts to be something bigger than they ultimately are – just no matter if there’s like 32 or 145 different tempo changes done within just one minute. It makes no difference; too much is just too much. Out of 7 songs on offer here, the most pleasing song oddly is a cover of SIX FEET UNDER song, titled ‘Torture Killer’. Russian Deathsters do enough justice to the original song, maintaining similar heaviness there’s in the original SFU song. A sad thing, however, is "Cornered" left me pretty neutral after all as far as its song content is concerned. Better luck next time though. Band contact: www.myspace.com/fatalband, label: www.msrprod.ru or www.myspace.com/msrprod