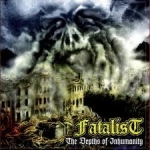 When FATALIST released its debut demo “Loss” back in 2007 I was quite impressed. This was cool traditional Swedish sounding Death Metal with some US old school influences. Although FATALIST didn’t create anything sensational new you can’t blame them for being a copy cat because you won’t find the typical ENTOMBED or DISMEMBER riffs. They just play a similar style and have that typical Sweden sound. The seven demo songs are great, vicious old school Death Metal with some melodic riffs and leads. And when I talk about melody here I don’t mean AT THE GATES or DISSECTION kinda stuff. FATALIST just performed good old school Death Metal played at varying speeds and with some very fine guitar leads and tons of heavy, powerful riffs. ‘Rivers Of Blood’ is an awesome example of how the combination of heaviness and melody can sound without being cheesy, this is truly an ass kicking song. Two years later in 2009 this demo was re-mastered and re-released via John McEntee’s Ibex Moon Records (plus four new songs) as the “The Depths Of Inhumanity” CD. The new songs are definitely not bad but I still prefer the demo songs, especially with that new sound. I must say, that the remastered sound is absolutely an improvement in clearness and heaviness compared to the demo recording. Now, six years later, F.D.A. Records re-re-released that stuff and added another bonus track: the DEATH cover ‘Beyond The Unholy Grave’ (which originally appeared on the "Afterparty Massacre" soundtrack CD back in 2011 – Frank). Which in my humble opinion sucks big time! I’m not and never was a fan of cover songs at all but this is really, really annoying. I absolutely hate that lame and poor sounding drum machine on this recording which totally destroys this hymn. Anyway, that bonus song is the only thing I have to complain about. “The Depths Of Inhumanity” is a not an essential must have but a good and solid piece of fine old school Death Metal and really worth your attention. www.facebook.com/fatalistband, www.fda-records.com 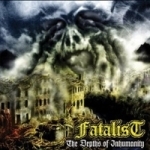 Do you love Swedish Death Metal from, let’s say, the ninetees? If you can reply this with nothing but a big YES than this first FATALIST album "The Depths Of Inhumanity" should be in your collection. These four lads from sunny California bring us what may be the finest SweDeath revival from the States since DIVINE EVE. The enthusiasm these guys share in worshopping the Stockholm style is really contagious and wrapped in 11 very decent and intense songs. Decent? Yes, decent, because you won’t suffer an overkill in terms of brutality, aggression or darkness. Also slightly different from the classical ingredients is that vocalist Wes Caley isn’t growling his guts out. Instead, he screams out his lungs and it suits their style just the same. Maybe the vocals are buried a little bit too much under the massive guitarsound, but this won’t be a problem since this album was made to bang your head off and not to focus on lyrics. Originally the band started as STOCKHOLM SYNDROME, covering the… Stockholm style. Today, under the FATALIST monicker, their first love is still the deepest. Unoriginal as the jokes from "The Naked Gun" but entertaining nonetheless. All tracks follow the same pattern in mid-tempo speed with occasional changes and leads that are as enjoyable as the DISMEMBER / GRAVE type of riffing. Tracks 5-11 were originally released as the "Loss" demo 2007 and I can’t tell you if they got a special treatment for this album, since I haven’t heard them before. In the final track ‘Rivers Of Blood’ these guys can no longer hide that they practised their ass off on DISMEMBER’s "Like An Ever Flowing Stream" writing their material. So every fan from the SweDeath will be pleased, even though stuff like is no exception anymore these days. Time will tell if the scene (finally) learned from it’s past when it comes to trends, but with albums like "The Depths Of Inhumanity" we’re pretty safe (for now). For more info check out www.myspace.com/fatalist666, www.ibexmoonrecords.com.