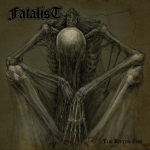 Ok, so this is my first review after a few months of absence (moving to a new home is always challenging), during this time I’ve been listening to lots of new and old stuff, but I was in need to listen to something unique and exciting (have to admit the teasers of new ALCEST and DARKTHRONE gave me chills), and I came all the way waiting for some new records from promising bands that I thought just vanished after the Death Metal revival was slowly going down. I remember when I saw the logo of FATALIST and instantly though this was an ENTOMBED clone and based on the origin of the members it was going to sound more like a second grade copy of “Clandestine” rather than a fresh putrid release (did I just wrote fresh and putrid in the same sentence? You get my point). When I first got “The Depths Of Inhumanity” from Ibex Moon Records I knew something special was happening within FATALIST, that compilation sounded different from what I thought the band will sound like and well that happened in 2009, 7 years ago! I was sure FATALIST was no more after 4 years passed and nothing else was heard, until now… In April 2016 I saw some news surfing the web saying FATALIST was active, they got a new drummer and were about to release their first official full length record. Some months have gone and now I was able to hear “The Bitter End” and it’s a bit of a difficult task, at least for me, to review this record with giving it lots of praise, but I’ll chill out and try to be as neutral as possible. Ok here we go…holy shit… this thing sounds great. As soon as the first lyrics and main riff start to sound out of my speakers I knew this album was a fun ride. I’m hearing a more mature FATALIST than before, compact yet massive. I think I can use as a close (yet not equal) reference the debut album of the mighty HORRENDOUS, production wise and maybe even the way it gets executed, but there are other things flying around, there are some DEMONICAL, INTERMENT sections in between, paying tribute to the Swedish sound with headbanging riffs and catchy songs. What I like about this record is that it sounds tight enough to compete with the big leagues, the creators and the masters of the genre. I think FATALIST created something even better than the last records that has been put out by the bands they worship and admire. Give this record a try, it will not disappoint if you like DEMONICAL, VOMITORY, INTERMENT, LIFELESS, etc. Listen up and grab the record at: www.facebook.com/fatalistband, www.fda-records.com