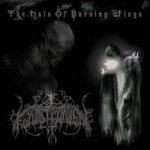 This record was issued one year ago, but it screams for a review in these very pages, so much the music fits with the overall concept of VOICES. FAUSTCOVEN is the brainchild of sole member and composer Gunnar H. Hansen, and comes from Norway. Let’s dissipate right now all the misunderstandings that could spread regarding this affirmation. Forgot all you know already about Norwegian Black Metal and all the clichés attached to it. Gunnar offers a far more original journey into mystery. Imagine BATHORY colliding with PENTAGRAM (US) and BLACK SABBATH and you could figure what FAUSTCOVEN is about. The guitar sound and the vocals conjure up memories of the classic three first BATHORY albums, and help to build a very nocturnal occult atmosphere, while the heaviness, the pacing and the low ends bring to mind the best moments of traditional Doom. This hybrid appears perfectly viable in the end, trust me on that! If you also miss the atmosphere prevalent on the first HELLHAMMER / CELTIC FROST albums, check this one without delay. I think that titles like ‘Under The Pagan Hammer’, ‘Baptized In Goat Blood’ or ‘Castle Of The Tyrant’ are evocative enough of the rather graphic content of this disc. I bet that Gunnar found the most of his inspiration in popular literature, cinema and comics rather than in the “serious” Satanism of his country mates. Thus the music gains in maturity and class because an artist has to establish a certain distance between him / her and his / her sources. The key of great Dark Metal is to take the things seriously and not too seriously at the same time, to channel the insanity at very carefully selected moments. I don’t think I am wrong in assuming that this attitude guided Gunnar while he composed his great music. The result is so convincing and enjoyable that you can shelve this CD next to “The Return”, “Morbid Tales” and “Don’t Break the Oath” without a single afterthought. See this very inspiring music as a respectful salute to the dark gods of the scene of the past, fresh while staying faithful to the roots or early Death / Black Metal. I consider this as a minor classic which brings back the excitement of old into a rather asphyxiated scene. For some supplementary info, check out: faustcoven.conspiracy.at.