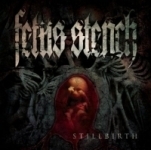 How can I start here? First off, FETUS STENCH is a Swedish band. That right there should be a huge hint. And they play Death Metal. Still don’t get it? Well, imagine a sound based on the NWOSDM, but faster and more aggressive. It does have a mix of both, the old and new styles. A relentless attack of sharp riffing, intense drumming, pounding bass and mid-ranged vocal grunting. Also, the constant shifting of rhythm patterns requires you to really pay attention to everything that is happening. Execution wise, these guys know how to play their instruments, since the recording is totally flawless. The production just adds to it, since everything is clear, defined and well heard in the mix. Fear not, the rawness of Death Metal is still there. The guitar and bass tones are thick and heavy. Maybe the drums are a little sterile when it comes to the sound, but aren’t all post-2000 drums alike? Now, FETUS STENCH is not bringing anything new to the genre. Sometimes their songs get a little carried away. They need to add more memorable riffs such as the ones found in ‘Bashed, Defaced And Disfigured’, my fave track off this album. They do have the attitude and the strength to be reckoned as a new force in the, in my humble opinion, already crowded Swedish scene. So, I do think that if they keep working as good as they’ve had, they should develop their own sound and character. So far, this is an impressive debut. Just take in count that being from Sweden and having all those classic bands and albums in their musical background, FETUS STENCH needs to keep pushing their own boundaries. If they can top "Stillbirth", they will get their rightful place in the Death Metal scene. But, alas, checking them out is mandatory! Go ahead and support them here: www.facebook.com/fetusstench, www.officialabyssrecords.com