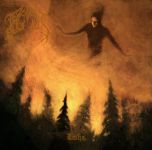 FLAGRAS are hailing from the eastern coast of North Germany. Active since 2013 already, they only released an EP before their debut “Lohe” was finally ready to come over us. Unknown to me so far, I was quite curious to hear what they have to offer as the German Black Metal underground is stronger than ever. The opening track ‘Crupta’ offers grim and cold Black Metal but without missing some atmosphere. It sounds like their fundament is the ancient school of true Norwegian Black Metal enriched by some atmospheric keyboards but definitely very grim. ‘Kairos’ and also ‘Toverie’ are following the same path and and offer solid but very cold Black Metal. There are traces into a more avangardesque or sometimes called Post Black Metal direction when they slow down the speed like in ‘Kairos’ and this makes it more interesting as the vocal work and drumming are very good performed. The fourth track ‘Útiseta’ starts to make the real difference as the sound is different. Warmer and sounding like from a different recording session, I immediately was into this sound as it is dark and evil but with a certain warmth and damn good instrumentation. Still grim, it goes more into the Post Black Metal direction and definitely unleashes the potential of the band. In this track they did everything right what a composer can think of. The guitars offer such a damn good atmosphere that it is definitely worth to check. The last track ‘Winternacht’ also starts very calm like a PINK FLOYD Metal cover before turning Black. Again here the atmosphere and instrumentation is very thick and the atmosphere is fantastic. The mixture of guitars, drumming and vocals enriched by the well-dozed keyboards in the back are definitely another highlight. As the album for me needs to be splitted into sides A and B, the direction they took with the last two tracks really is the one I wish they would continue with as those two tracks show immense potential and would make them not perish in the mass of Norwegian 90s clones. Originally self-released on cassette, Deviant Records saw the potential of the material and now released it again for a wider audience. Underground lunatics should give these underground warriors a listen. More info can be found here: www.facebook.com/flagrasband, www.facebook.com/www.solrecords.de