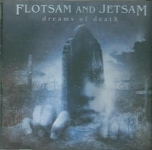 Like many others I lost track with FLOTSAM over the years: except for “High” they didn’t exactly blow me away lately. To keep a long story short: with “Dreams Of Death” they’re back on my list. The opening track (after the intro) ‘Straight To Hell’ starts out with some pretty fast double bass and track 3 slightly reminds me of old ANTHRAX (and of 80s FLOTSAM, of course) because of the chorus and the guitar sound. Actually, the slightly sterile guitar sounds surprisingly heavy and adds quite some brutality: fast, heavy and – catchy! ‘Bleed’ is a haunting Metal ballad / hymn with a chorus that won’t let you go and features excellent melodic solos. Then we have a stomping headbanger with an ear candy chorus called ‘Look In His Eyes’. ‘Childhood Hero’ starts out like QUEENSRYCHE in their heydays, then turns into a heavy banger before it culminates in yet another highly memorable chorus. Without a doubt, the highly moving ballad ‘Bathing In Red’ is the album’s highlight. If it wasn’t for the lyrics (the I-narrator kills his girlfriend), I’d say an edited version might crack the charts. On the other hand, this song is more disturbing than any CANNIBAL CORPSE song in a way (doesn’t mean I don’t like the CANNIBALs, folks). Then there is an acoustic track I don’t really need but it fits into the lyrical context or rather the dramatic stage of the album. Finally, ‘Out Of Mind’ is another track that rather focusses on the nasty side of Metal. In a way, “Dreams…” might be described as NEVERMORE for traditionalists and I simply love this record. There are those who don’t but somehow that makes it even more fun. www.flotsam-and-jetsam.com.