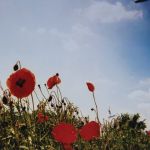 FLUISTERAARS from the Netherlands are active for more than a decade now, so it is no wonder that their new material in form of their third full-length “Bloem” sounds very matured. ‘Terre Muur’ starts pretty seventies influenced but quickly shows the fundament of their music. The two members Bob and Mink created good classic Scandinavian Black Metal with huge Post Black Metal influences, but there is also space for melancholy transported by the guitars and the caws. Maybe there are also some similarities to MGLA here and there but who cares. They definitely sound pretty unique and this opener is far better than the first track of the last MGLA album. The second track ‘Nasleep’ has the typical Scandinavian guitar work starting the song but it gets varied by Rock and some Folk in the vein of ALCEST and also the vocals vary to desperate screams. Especially the drumming needs to be mentioned as well as it is definitely brilliant and also the guitar work is outstanding. The second part of the song turns very atmospheric and shows the immense potential of FLUISTERAARS. ‘Eeuwige Ram’ slows down and reminds me somehow of a folky version of AMORPHIS and definitely has a memorable vibe and again singer Bob changes the vocal style and definitely tries to vary as much as possible. ‘Vlek’ stops this quiet interlude and returns to melodic Black Metal again but with slow parts but mostly uptempo without losing itself in speed. Especially the keyboard sounds really give this track an interesting note and again a blackened version of AMORPHIS is a good hint to describe this musical soundscape. The last track ‘Maanruïne’ continues the folky melodic direction and spreads warmth. This track fits best to the cover artwork which I normally would have expected from THE GATHERING in the 90s but this package is meant to break musical boundaries and stops to fulfill any expectations. Definitely a band worth to check and follow as in my humble opinion this is the future of Black Metal. For more info, please check one of the following sources: www.facebook.com/fluisteraars, www.facebook.com/eisenwaldofficial