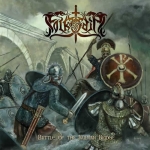 The term ‘multinational’ for a band has always been eye brow rising but it could be applied so fittingly with FOLKODIA. Formed back in 2007 by the late Ruslanas Danisevskis, FOLKODIA has seen contributions by musicians from more than 10 different countries, including France, Italy, Argentina, Germany, United States, Greece, Russia and Switzerland which turns it onto a mammoth intercontinental musical coalition. By consistently releasing an album more or less every year, the list of their releases is equally remarkable, with a grand total of 6 full-lengths between 2008 and 2013. In 2013, around the release of “The Fall Of The Magog”, Ruslanas Danisevskis sadly endured an uneven battle against cancer and passed away, which causes the band to take a break to reassess the future. However, with venerations to Ruslanas ideals, they became strong-willed to keep on going and come back stronger and heavier than before. They came out with the “Battle Of The Milvian Bridge”, which has been released back in November in collaboration with Stygian Crypt Productions (Russia). The title might hint, FOLKODIA play Viking / Folk Metal, which nowadays turns into a congested genre and makes it very hard to avoid being unsurprising. The lyrics containing ten pieces, describe the events that happened on more than 1000 years ago; On the morning of the 28th of October, 312, a decisive battle between the future Roman emperor Constantine and Maxentius took place near the Milvian Bridge of the river Tiber, not far from Rome. The battle followed numerous political maneuverings in the Tetrarchy and several military clashes. Winning the Battle of Milvian Bridge not only solidified Constantine as the sole ruler of the Empire but also cemented Christianity’s place as an official religion. Such intriguing and era defining piece of history clearly stated the ideology and expressions that FOLKODIA tried to grasp during this record creation. Musically, this record builds on melodic lines with the assimilation of a variety of musical instruments and vibrant vocals, both female and male, in a variety of textures and layers. Although the band is represented by a variety of musicians, instruments, voices, the outcome might not be altogether absorbing at primary exposure. FOLKODIA built this record with historical myth related context which summons the ideological glory, undying warrior mentality and rebellious ethos, the Viking / Folk tradition and culture behold. With the alternately harsh and clean vocals, amalgamated female vocals and the traditional instruments, features interconnected to Folk and Viking Metal is to be found on “Battle Of The Milvian Bridge”. However, an awkward set back among all the fine efforts of FOLKODIA, is the chief vocals deliverance which is being off key on a regular basis and didn’t seem to carry on the epicness and grandiose this record beholds sonically. Such matter could easily sent off any casual listener with prejudices about vocal patterns and deliverances, but souls that will be able to ward off the vocal out of the thought, should certainly be absorbed by the depth, variety and intricacy of the music bonded here. So, all open minded listeners should give this fine effort some time and have an expedition back to the medieval European battleground with FOLKODIA. Explore the band at: www.facebook.com/folkodia-231069820275861 or visit their label page: www.stygiancrypt.com