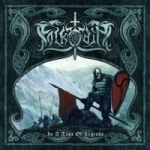 FOLKODIA
In A Time Of Legends
(Stygian Crypt Productions)
51:05min

There is an old saying that you can find for one and the same album for each great review at least two bad ones and especially at this modern times the opinions are raging (for nearly every release) from zero to 100 percent. The first official FOLKODIA release has reached the unholy Voices From The Darkside caves quite late – released in early spring 2009 via our Russian Pagan friends Stygian Crypt – and during the last months I’ve read several devastating reviews about “In A Time Of Legends”. But this album isn’t the expected Waterloo for a huge amount of the current FOLKEARTH line-up. The direction of FOLKODIA is very similar to the FOLKEARTH cosmos and I’m nearly sure that nobody would strongly argue if this album had been released under the more common banner. The album is offering a very passionate and Celtic influenced Pagan Metal with a wide range of traditional instruments supported by the very emotional vocals by workaholic Hildr Valkyrie and her male companion Elio D’Alessandro. The band was founded in 2007 and they released their underground demo “Odes From The Past” in 2008. Their official debut comes with the very good KrisVerwimp cover plus a booklet with all lyrics so nobody can advise that the band has not invested all their heart blood into this release. “In A Time Of Legends” is for sure not a true masterpiece due to some songwriting weaknesses – some songs are very similar especially in the middle section of this release – but songs like ‘Glory’s Stainless Victories’ are enough justification to leave your snowbound cabin. www.stygiancrypt.com, www.myspace.com/folkodia