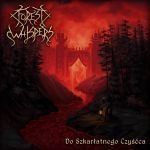 This Polish band was formed in 2013 by mastermind Hern, who started out handling all instruments and vocals himself, though has during the years put together a band, so he mainly is handling the vocals nowadays. “Do Szkarlatnego Czyscca” is an EP released late last year, as a follow-up to the band’s third full length album “Arkany Zniewolenia” released earlier, in January 2019. FOREST WHISPERS is playing quite straight forward second wave of Black Metal with some solid Scandinavian inspirations mixed with good old Heavy Metal forces, which sometimes make up for some great moments. The more or less epic ‘Zamiec II’ (a great track), also leads my minds towards NECROMANTIA, which again of course was heavily influenced by BATHORY and Heavy Metal. The vocals take a little while to get used to, and are an acquired taste, and I like it. They are raw and without compromise, a regurgitated yell mixed with a burped scream, topped with frustration and anger. It works really well in this context. “Do Szkarlatnego Czyscca” as well as the band’s earlier material is a quite nice trip down memory lane, with a tad of their own doings, delivered with energy and emotion, together with the atmosphere is great and drawing. Enter where cold winds blow: www.facebook.com/forestwhispers, www.fallentemple.pl