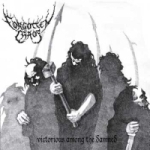 Black, cold grim, sometimes melodic Black Metal from this Swiss band formed back in 2003. This is actually their first album released back in 2006, but for one reason or other here it is for review. It is not bad by any means, but is sounds too much to many other bands that it loses identity. The production is very rehearsal like, with a very distinct guitar sound, and quite weird drum sound, but at the end it all fits the overall aura of the band quite well, although a bit more production could have given this band another dimension. References to early Norwegian Black Metal are to be found in most of the songs, with more than a subtle touch of melody here and there, and some dirty Thrash Metal. 13 songs of a somewhat melancholic Black Metal, that early BURZUM must be the closest reference, although with more tolerable vocals. I like the way the sound is raw but at the same time with a decent recording level, the band plays safe at mostly a mid-tempo approach, as when they speed up it all sounds too damn chaotic for its own good. While enjoyable, for 2006 this was a bit outdated, and that has not changed too much almost 6 years later. Those looking for more back to the basics raw Black Metal will like it for the 2-3 beers it takes to enjoy. Then I am afraid it will collect dust again until more rotten beer is found. www.forgottenchaos.net