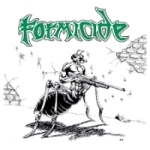 FORMICIDE were a Massassuchets based band who did manage to receive a good amount of coverage during the late 80s via the three demo tapes they had released between 1987 and 1989. Many observers at the time had bet that they would get signed sooner or later with the type of material they were offering. In the end nothing happened to them and the band broke up during mid 1989 after the addition of a second guitarist, Craig Silverman. Now the newly launched label, Due Process, decided to do justice to that long forgotten band by releasing a CD featuring those three demos plus three unreleased tunes recorded with Craig during early 1989. The first four track 1987 demo sounded very average as they were playing stuff that was basically listenable but forgettable Thrash Metal. Their next four song tape from 1988 showed a definitive improvement as the band had adopted a somewhat Bay Area sound, trying very hard to come up with sharp razor riffing à la EXODUS, VIO-LENCE and the likes. And they did succeed to a certain level but the several included somewhat ‘mosh’ parts (can you be more boring than on ‘Dead Man’?!) coupled with the rather unimpressive and boring vocals courtesy of Steve Reppucci (I guess he better should have fronted a Crossover act) prevented them to enter the "killer acts" league. Out of all the material featured here this recording was certainly the standout one. Then comes the 1989 four song demo, not only the poor sound doesn’t help them but materialwise the band had nothing to offer anymore. The riffing was particularly poor and insipid, again with that moshing aspect being predominant (reminiscent of some VIO-LENCE "Oppressing The Masses" material). Nothing really memorable that you’d be forced to stand up and take notice for, something I did wish it could have been the case considering that 16 years had passed and I wasn’t familiar with their material anymore. Out of he three remaining numbers, two appeared on the third demo but with different guitar work and the last one is just another FORMICIDE song, nothing to bang your head against the wall with. Impressive musicianship for sure but once again this aspect is not sufficient to pen effective material. A real letdown here because I had always seen FORMICIDE as the Eastcoast answer to the Bay Area wave and with what I’ve heard here they were just comparable to 4th rate Bay Area acts such as EPIDEMIC, COMTEMPT and the likes. Label website: www.dueprocess.aversiononline.com