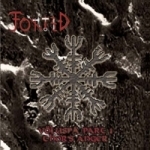 If I was rude, I’d call this is a cheap copy of early Black Metal-bands since the ingredients like old ENSLAVED (especially ‘Creations’ is so close to their classic ‘Slaget I Skogen Bortenfor’ that it is hardly bearable), TULUS, later DARKWOODS MY BETROTHED are so obvious that we could turn it down with this sentence. But since albums like the mentioned ones become rare nowadays, there must be something behind it. Honestly, I had very high expectations on this album when I heard that the same guy who is behind CURSE and especially the ultrabrilliant POTENTIAM was also the force behind FORTÍÐ. But where the two other bands deliver very original und outstanding music (I still wait for the follower to "Balsyn"!!!!!), this CD is just good music with the originality of a manufactured car: none. We have heard everything that is on this album and the very varying sound (compare especially the end of song four to the beginning of song five) doesn’t make it easier. Besides that there’s nothing to criticize on this album since everything is well-performed, the songs get to the point etc., and if I think about buying this album as LP, it must have a certain something, this "something" however is definitely not originality. www.no-colours-records.de