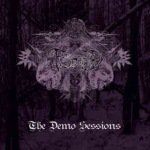 FORTÍÐ is an horde originally from Iceland and active since 2002, before their mastermind relocated to Norway. Active now in the Pagan Metal scene, this collection of eleven tracks including an ENSLAVED cover tune shows the band’s roots during their Iceland area. Hardly comparable to their last good output “9”, this collection shows their raw Black Metal roots. Inspired by the Norwegian scene back then, mastermind Eldur and his former companions delivered some raw and harsh material before developing their style into a more melodic direction. The tracks as mentioned were kept really raw and show obvious influences of the Norwegian scene from the early 90s. Bands like ENSLAVED and SATYRIVON surely can be named as influences. Raw and fast guitars accompanied with blast-beats and really grim vocals spread a really unholy mood. But even within the eleven tracks a development can be determined from a really raw basis to a little more melodic direction but of course far away from the current material. Weak points are the bad production as this is really bad and spoils the listening during several tracks. Maybe the origins used for this CD are that bad but this makes it difficult to listen to the material more detailed. Also to be honest the material is not that unique and far away from the quality the band delivers now so in the end it is only recommendable for die hard fans of the band or underground lunatics. Worth to mention and to check are the tracks ‘Electric Horizon’ and ‘Sun Turns Black’ as those tracks give already a hint, where the band’s journey will go to in the following years. For more details please check the following sites: www.facebook.com/fortid, www.satanath.com/sodp