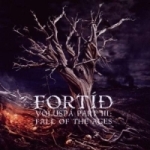 The latest Schwarzdorn releases had been everything else than essential but with this album the German label is starting more than impressive into the Metal year 2010. It does not take long to realize the extreme potential of this act from Iceland – just listen to the first two tracks and cold, snow covered mountains will automatically appear in front of your inner eye. The Viking Metal era is definitely gone which is no surprise due to the spreading Pagan Metal virus but FORTÍÐ are hailing the true old gods of the mid 90s. The band was founded in 2002 as a solo project from Eldur (POTENTIAM, CURSE etc.) and so far the band has released two albums via our dear friends from No Colours Records. Especially the opener ‘Ragnarök – Army From The East’ is bringing back the glorious times of ENSLAVED and / or WINDIR before both bands ‘disappeared’ to other shores. During the playing time the influences from the best Viking Metal band of all times – without doubt WINDIR – are becoming more obvious, but this time I will definitely not complain. FORTÍÐ are still in the position to present their own musical ideas – for example the slightly progressive song ‘New Dawn’ – and in some way they are the first band in years which deserves to be compared with the outstanding act from Sogndal / Norway. I’m not really a disappointed ENSLAVED fan even if the band anno 2010 sounds more progressive than aggressive but the third FORTÍÐ release shows once more that a beast needs sharp teeth to kill its prey. www.myspace.com/fortidofficial, www.schwarzdorn.de