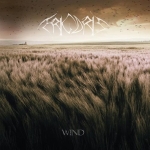 There were and still are loads of Pagan Black Metal bands around. And to be honest, most of them are absolutely unimportant. So, what will German FRIGORIS add to the genre? Well, nothing new, but they are doing well in what they do. “Wind” is the second album of the quartet, and it’s already two years ago that it saw the light of day for the first time. Now Godeater Records re-released the album in an enhanced version with two extra songs. Based on Black Metal, FRIGORIS spice up their songs with folkish acoustic parts and fine, pretty catchy melody lines, thus creating some pretty long songs, half of them more than seven minutes in length. Yet the songs are thrilling, since they are well balanced and either well composed. Especially the rather Black Metallic ‘Zwischenwelten’ and ‘Frühlingsnacht’ with its pretty surprising female vocals are quite catchy, even though the other songs are not less interesting. Just take ‘Ode An Verlorene Seelen’ as an example, an instrumental that receives its tension through sampled voices. Or the final ‘Wenn Die Maske Bricht’ with its sweeping acoustic guitar parts. The two extra songs on the re-release are songs from FRIGORIS’ first album “Nach Dem Krieg”, recorded live earlier this year. Sadly both songs can’t really keep the tension of the newer songs, additionally the thin soundboard recording doesn’t sound that good anyway. But as far as the original album is concerned, “Wind” is a highlight of the Pagan Black Metal genre, and it raises hopes for another fine album by FRIGORIS. If you want to find out more, visit www.facebook.com/frigoris.official, www.frigorisofficial.de or www.facebook.com/godeaterrec