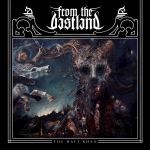 Imagine to be in a land where freedom is just another word. Where every move you do, every action you achieve might be under the watchful eye of the authority. And that authority is still set in a mind where death is the answer to almost every little thing that will bother them. And I must tell you that they are also under the influence of a sadistic religion cult and everything bothers their god. Yes, even in this pandemic years such places exist and the main member of this band comes from one of those places. Mastermind Sina is from Iran. A Black Metal band in Irak most likely means death, and he defied that. I suggest you to check the documentary “Blackhearts”, as it shows some of the history of this man and all his struggles to play the music his heart is on: Black Metal. This is actually his sixth full length since being created in 2010. The style is firmly rooted in the Norwegian Black Metal wave of the early 90s with subtle but constant touches of oriental music. Melody is no stranger in here, and the tremolo riffing is a constant. The vocals are the typical high pitched screams, that at times might be a bit monotonous and that they can add a lot more if some variety is injected. References to IMMORTAL, MAYHEM, BATHORY and even MELECHESH can be found here. The production values are good, if maybe for my taste the guitar needs a bit more power. There are some really killer riffs like in ‘Khan E Chaharom’, that proves that even in these times where almost every sound might already be conceived in extreme Metal, there is still room for some great music. Actually those epic parts fit a lot better to the band, and they shine while doing it in an upper mid-tempo scenario. The drumming is also quite interesting here. Old school Black Metal fans will surely like this one. www.facebook.com/fromthevastland, www.satanath.com, www.facebook.com/ibdc666