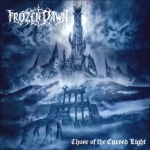 FROZEN DAWN
Those Of The Cursed Light
(Xtreem Music)
53:52min

FROZEN DAWN is a Black Metal horde from Madrid and they are already active since 2006. They now present their second full length via Xtreem Music, who had no other choice than signing these guys after hearing the new material. "Those Of The Cursed Light" presents itself touched by the hand of melodic Scandinavian Death / Black. The album title and the artwork already reveals their nearness to bands like DISSECTION, MÖRK GRYNING, NAGLFAR and older MARDUK, with slight notes of Norwegian Black Metal in their guitars. The guitars run very fast, accompanied by fast drumming and pounding double bass and the harsh screamed vocals of vocalist Grinder. The presented nine tracks are very varying and well instrumentated, with a strong and powerful production, reminding of good old Abyss productions. Especially the lead guitars of guitarist Lord Morgoth are heavily influenced by good old Heavy Metal mixed with the freezing melodies of melodic Black Metal played by DISSECTION or MARDUK on "Those Of The Unlight". The tracks anyway sound unique and the band managed to write some really memorable songs like the opening track ‘Banished – The Everlasting Confinement’, with its blood freezing guitars or their own small band hymn ‘Circles Of Frostbitten Ice’, a real killer track, which also easily could have fitted on a lot of the classic 90s albums. Nevertheless their interpretation of this style really sounds modern and fresh instead of trying to sound too old school. Also a special gimmick for a Spanish band is their closing track ‘Kalte Seele’, presented in the German language. For me, FROZEN DAWN is a really great sounding band and if you are into melodic Death / Black Metal, this band is really worth checking out. The blackend march into eternal frost has only just begun. www.frozendawn.com, www.facebook.com/truefrozendawn, www.xtreemmusic.com