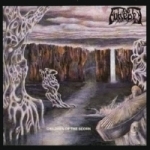 Talking about some classic or at least nearly classic Death Metal albums, in my opinion it’s rightfully to claim that Finland’s FUNEBRE’s “Children Of The Scorn” album – originally being released in 1991 already through Finnish Spinefarm Records – is such an album. Just like many other Death Metal bands coming from European Death Metal territory in the late of the 80s, FUNEBRE’s absorbed most of their influences from the Swedish Death Metal scene back then, letting such bands as NIHILIST / ENTOMBED, CARNAGE, DISMEMBER, GRAVE and the likes, be the strongest influences for the band musically. They managed to leave two demos (“Cranial Torment” in ’89 and 3-song “Demo ’90”) and only one album behind them before they split up for good 1991. However, FUNEBRE’s reputation to the whole Finnish Death Metal scene was remarkable and they were undeniably a very influential Death Metal band for many extreme Metal bands that popped up in the Finnish Metal scene during the 90s since the band was formed – and even after when they ceased to exist. Unquestionably they influenced more new Death Metal bands here in Finland back in the day than one could possibly imagine in the first place. Along with such Death Metal bands as ABHORRENCE / AMORPHIS, XYSMA, DISGRACE, CONVULSE, SENTENCED, MORDICUS, CARTILAGE, DEMIGOD, PHLEGETHON, DEMILICH and a few other bands, FUNEBRE was probably the one which gained most of the attention due to the guys’ own activity and enthusiasm with the global underground Death Metal scene back in those days. It’s great to see that some ‘die-hard scenesters’, who have actually lived through the 80s Metal scene and even survived up to this day, are still determined enough to dig up some of these old “gems” back to the daylight once again and re-release them, well, let’s just put it this way, “in the name of the past glories & fame”. Dave Rotten from the Spanish Xtreem Music has always been closely yet strongly been involved with the extreme Metal scene and obviously has sharp ears for some classic, vintage Death Metal releases. He bought rights from Spinefarm Records for FUNEBRE’s “Children Of The Scorn” album almost recently and re-released it with both of the bands two demos on it as a bonus under Xtreem Music’s so-called ‘Classic Series’. Now call that a big favor to everyone who has always been curious to check FUNEBRE out, but haven’t got a potential chance for it because the band’s only album has already been long out-of-print and their demos are surely even harder to track down nowadays. The production on the original pressing honestly sounds rather horrendous; it’s thin and not heavy enough to fully support FUNEBRE’s brutal, but surprisingly melodic Death Metal (thanks to Timo Tolkki’s poor producer’s skills back then…) and I’m not quite sure what Dave and co. have actually meant by stating in the info kit of the album that this newly released version has an ‘enhanced’ sound because I honestly couldn’t make any drastic difference as far as a sound polity on these two releases are concerned? Nevertheless, “Children Of The Scorn” as a wholeness, is a very solid, well-crafted package of the early 90s Swedish – tinged Death Metal with a relatively crispy, but unfortunately not heavy enough sound. Anyway, the album has stood the test of time better than many other albums that were released back in those days. Such songs as ‘Sinner’s Eve’, ‘Congenital Defeat’ and ‘Walls That Held Screams’ were absolutely some of the best tunes the guys in FUNEBRE churned out ever. Like I stated earlier, it’s just a pity that the awful production doesn’t do much justice for them, and there’s nothing you can do for it any longer. What a screaming shame really. “Children Of The Scorn” also has a new, reduced cover artwork as well that has luckily stayed somewhat loyal to the painting of the original artwork that in fact, can also be found from the same package. Even in that sense, the entire re-release of this FUNEBRE’s classic Death Metal record seems to be a carefully thought-out thing from start to finish, so it’s highly appreciated that Dave has done such a magnificent and important move in order to get this long lost (but certainly not forgotten by any means!) gem available again for anyone who wants to feel a great smell of old, open graves regarding a fine old school Death Metal. I firmly believe if you just have ever digging the early Swedish (or Stockholm?) Death Metal sound and possibly haven’t been in this privileged bunch to check Finland’s FUNEBRE out earlier, then I gotta assume you won’t wanna miss this great opportunity for the second time. Do you? www.xtreemmusic.com