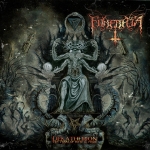 FUNEBRIA is a Black / Death Metal band from Venezuela and the subtitle of this release expresses a kind of commemoration of ten years of activity (in which they released another album and a couple of minor editions). "Dekatherion: Ten Years Of Hate & Pride" shows us an ambitious band, playing fast, melodic Black / Death Metal, that seems to me to be carried by a certain attempt to intrude into the BEHEMOTH camp. The music is likewise fast and aggressive (mainly the drums, highlighted in the production, are really extremely fast and Polish like) and not lacking in melodic passages, as in the well-achieved ‘Aeon Of Tyranny’. One finds plenty of intricate guitars, great leads (like in ‘Serpent Sign’), occasional passages with keyboards, oral declamations (in English and Spanish), female screams… you get the drift. Sometimes they even add some MORBID ANGEL – esque touches, like the entrance of ‘Azag’, but they are altogether closer to stuff like EMPEROR or early CRADLE OF FILTH. The main vocals are very screamed and lean towards the higher pitch, perhaps exaggeratedly so. The result is a Black Metal – ish rasp I am not as enthusiastic about as the rest. The closing track, ‘Tormento’, is sung in their mother tongue, and a good example of a certain monotony the main vocals sometimes tend to follow. Other than that, it is also a fine track and a good example of FUNEBRIA’s musical strengths. It’s even surprising that a country with as many problems as Venezuela can spawn bands with such quality. Let’s see what the future holds, since the economic collapse forced them into a pause and apparently they may re-group in Colombia. Good luck for them! Keep updated and get more info at www.facebook.com/pages/funebria-official/106461709375429, https://funebriaband.bandcamp.com, www.satanath.com