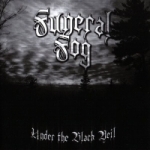 1999 marked the year of birth for FUNERAL FOG, two Black Metal heads dedicated to summon the old spirit of northern Black Metal à la DARKTHRONE, IMMORTAL. Now the two sinister creatures come up with their debut “Under The Black Veil” and well I have to say that it is a kind of fifty-fifty release: on the positive side there are the grim, dark vocals that remind me a bit of JUDAS ISCARIOT, an excellent sound and lyrics that concentrate on darkness, hatred and death instead of drifting into the shitty realms of NS-ideology! What I consider extremely negative is the use of a drum computer, which destroys a lot of the mid 90s feeling FUNERAL FOG manage to create in their songs. This CD would be really good, if there were human crashing drums, especially in slow parts I miss clanging cymbals, aggressively pounding doublebass and a skull-shattering snare, but fuck, FUNERAL FOG made a big mistake here! Songs like the intense hymn ‘Immortal Summoning’ or the monotonous storming opener ‘Forest Of Shadows’ are excellent songs, that would have been fantastic with a real drummer! Go to www.mp3.com and check out some of FUNERAL FOG’s songs and decide for yourself, I will have my problems with “Under The Black Veil”, because drum computers are a sucking pest!!! Check out the band’s website, if you like: www.geocities.com/funeralfogweb/