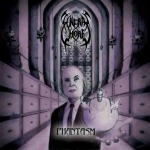 FUNERAL WHORE was formed in the Netherlands, back in 2006. But it was not until 2009 that their first demo tape came out. Since then, they have been steadily releasing material (2 more demos, 2 splits and their debut album from 2012). After some line-up changes, specially in the drum department, they teamed up with F.D.A. Records to release their sophomore album, "Phantasm". And I am ashamed of myself for not knowing about this band until now. I can’t deny their name reminded me of MASTER’s song, ‘Funeral Bitch’ so I wondered if they had any similarities to that band in particular. Well, I was not too far away from that I guess, with an added PESTILENCE / ASPHYX vibe from their early albums, respectively. But, in my humble opinion, what sets FUNERAL WHORE apart from hundreds of bands playing this style of music is their sound and their ability to write outstanding, memorable riffs. I got at least 4 songs still stuck in my head from the last listen I gave to "Phantasm". Production wise, this album sounds like it was recorded in the mid 90s. It’s got the heavy and dense Dutch sound all over it; 11 songs full of haunting and deep growls, crushing guitars, pounding drums and a surprisingly heavy and present bass guitar performance. Besides it’s pretty obvious concept from the movie (hence the cover art, which I found somewhat unfitting due to the quality of the drawing), "Phantasm" is a mid-paced Death Metal tour de force. Go ahead and get this album ASAP. Death Metal to the bone, as it was always meant to be! You can contact the band here: www.facebook.com/fw.oldschooldeathmetal. And also, buy their album via their label here: www.fda-records.com