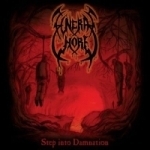 FUNERAL WHORE from the Netherlands have released several demos and a split 7" since the band’s origin in 2006 and now they finally inked a deal with the Mexican label Chaos Records. First sign of this collaboration is the debut full-length "Step Into Damnation" which is a damned fine and ass kicking album. Many of the new "old school" bands can be categorized as ENTOMBED / DISMEMBER clones or if they sound more brutal and blasphemous as INCANTATION disciples. Good to see that there are also bands which choose another path. FUNERAL WHORE is one of those bands. Sure, they definitely will never win a price in an originality competition but one can’t call them copycats either. I would say they are surely influenced by bands such as GRAVE, early GOREFEST and the early 90s US scene and some riffs remind me of mighty CIANIDE. But they are going their own way and deliver flawless old school Death Metal the way it was meant to be. Instead of reinventing the genre they concentrated on composing great riffs and awesome songs. The compositions have a good balance of groovy rhythm guitars and some great short but intense leads mixed with pounding drums and great hoarse and deep roaring vocals. "Step Into Damnation" is a compilation of 11 blistering songs which wanna make you bang your head and raise your fist. The music is mainly mid paced with some slower and a few faster parts but you won’t find any blast beats nor could you call it Doom Death. It’s just a deadly dose of straight forward Death Metal, simple structured but very effectivly arranged. To sum it up: "Step Into Damnation" is very enjoyable and highly recommended to all friends of pure old school Death Metal. So do yourself a favor and don’t miss this crushing masterpiece. www.myspace.com/funeralwhore, www.chaos-records.com