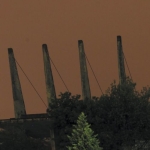 Upon first glance, I did not expect to like this release, and after listening to it, I’m pleased to say I do like it, but I’d like it a lot more if it weren’t for a few things that I think make the album harder to listen to that it ought to be. After the third song it’s a spotty journey through cool riffs and slit-your-wrist boring and slow passages. The cover art looks like it has nothing to do with the music, although it does look dreary. But, what looks like four smoke stacks and some trees doesn’t exactly scream "Black Metal album!" Anyway, the album isn’t bad. There’s discordance, moodiness, and hypnotic melancholy. One thing I found confusing is the way a song will move along then come to a halt and meander along with a few slowly played notes, then start up again. It’s not a major flaw by any means, but the album might be better if some of the songs weren’t so long that practically two songs are lumped into one. For instance, track 3, ‘Zamawianie Drugie’ clocks in at 3:50. It’s the shortest song on the album and consequently has the least amount of filler. The next song is over 13 minutes long and I don’t know about you but what kind of song needs to be that long? Halfway in, the song goes almost completely quiet, only the plucking of a couple of strings lets you know it’s still going. Thankfully the band can write some good, cold, riffs. When it finally kicks back into gear at the 9:00 mark we are treated to a dark, kind of psychedelic part that leads into another set of riffs and patterns that makes me wonder why it all had to be lumped in together and take so long to resolve. The very next song, ‘Nigdy I Nigdzie’ takes a whole 3 minutes before it actually starts. Before then it’s 190 seconds of boring attempts at a morose atmosphere. But just when I thought there’d be more of the same, along comes track 8, ‘Beze Mine’ which contains the heaviest and most aggressive riff on the album. One more song and the album is concluded. Although I found a few things to point out, it’s not like this is truly bad or unlistenable. If you have some time and feel up for some Black Metal, give this a try and see what you think. www.let-the-world-burn.org, www.pagan-records.com