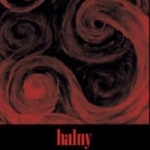 Another EP from this Polish sophisticated Black Metal talent. After their amazing "Grudzien Za Grudniem" they released an EP called "Huta Laura / Katowice / Królewska Huta", and here’s already the next one. This EP features one track ‘Halny’ which lasts almost 20 minutes. Starting quite mellow, you’re launched into space immediately. Not dark, but epic like you might know on some progressive / experimental (or just on non-Metal) records. But when the guitars speed up and drums set in and the disturbing voice of Nihil awakes, you know this is going to be more intense and they don’t need to blast away for that matter. Just the right interaction between each instrument to form a massive, riffing whole, but this doesn’t last long while this track is full of breaks and changing and more like the experimental ones from "Grudzien Za Grudniem". So, another journey which makes you forget about the actual length and incorporated elements less controversial. What stands out on this one, is that riffs had some Pagan / Folk melodies and their experimenting seems to increase with every release, making them a league of their own. I don’t know why, but for some reason I couldn’t really get into this material. I guess it’s just too long for my taste because the quality is again of high level. It’s an interesting ride again, but in the end, they stay too much on the same lane, with seatbelts tight, enjoying the view. For more info, check www.let-the-world-burn.org or check Pagan Records on www.paganrecords.com.