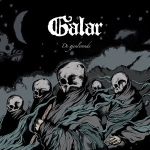 Viking Metal – honestly, I have no idea of a proper definition of that genre. Bands rooted in the homeland of the vikings? Using instruments the vikings played some hundred years ago? Some live action role playing Metalheads? Taking the viking culture as an inspiration for lyrics, cover artwork and band photos? By the way, the helmets with horns were invented by Richard Wagner for his operas. For me the most fitting definition of Viking Metal is music (based on Black Metal) which articulates and reveals the beauty of Scandinavian nature. "Everywhere glaciers and snow and ice between the peaks and mighty moraines by the fjord. These are the elemental forces itself in its development, water and stone, severity and frost". Accordingly to these words by Fridtjof Wedel-Jarlsberg Nansen (1861-1930) you can add the glistening sun, the severe cold, persistent fog and awesome austere and at the same time mellow places. GALAR from Bergen, Norway are active for eleven years by now and "De Gjenlevende" (translated: "The Survivor") is the third full-length output. One main influence stands before all others – BORKNAGAR. The same style of music, the same mixture of clean singing and gargling shrieks. Of course all lyrics are written in the Norwegian language, only the cover does not seem to fit in the Viking Metal scheme. Did I mention that GALAR are heavily influenced by BORKNAGAR? A copycat? Yes, but a pretty brilliant one. Sounds more like BORKNAGAR than BORKNAGAR itself. A wide variety from grim Black Metal fury, hymnic eulogies, dramatic melodies and calm piano parts, I even spotted a violin. Once you have listened to this kind of music you will never forget it. And just in case you never experienced the magic of BORKNAGAR, do not hesitate and take a listen to GALAR. Viking Metal at its best! www.galar.no, www.facebook.com/galarofficial, www.darkessencerecords.no