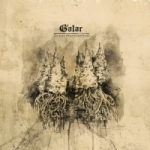 Viking Metal – strictly defined by some as an offshoot of BATHORY’s creation – can prove hard to define. There are fewer character traits that give one a sense of relative uniformity between bands, as there surely is in Death Metal. Be that as it may, those character traits, however few, consist of: viking lore (obviously), folky singing and either fast Black Metal riffing (ENSLAVED) or epic, thunderous ballads (BATHORY again). What this band, GALAR, plays is, by my admittedly crude definition, not Viking Metal at all – it’s between Folk and Viking Metal. Folk Metal is much easier to understand. The game is in the name: Folk music and use of some indigenous instruments. At times this album sounds like a bizarre Prog-Rock album. KING CRIMSON meets JETHRO TULL meets ENSLAVED. Weird, but not without its beauty. www.galar.no, www.darkessencerecords.no