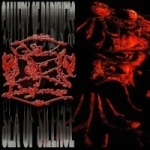 OF TREES AND ORCHIDS’ Florian recently gave this CD of his second band to me. Some of you may know the title track from "Only Death Is Real Vol. 4", actually one of the rare few outstanding songs on that sampler. The first detail that already strikes you about the intro is the vocalist, Konstantin "who the hell is Chris Barnes" Lühring! What a voice! Generally, G.O.D. are much more in your face than OF TREES…: this is brutal! Still, they’re no cheap CANNIBAL CORPSE, let alone SIX FEET UNDER clones: sometimes Florian’s faible for MORBID ANGEL shines through but they’re definitely looking for an identity of their own. So consequently, G.O.D. are not only straight ahead Death Metal. The production isn’t quite as strong as the latest OF TREES… but still good enough to cause some serious injuries. Excellent musicians: no surprise concerning the guitarists (both from OF TREES…), one hell of a drummer and of course the only true possibility for a new SINISTER vocalist, (this CD is already 2 years old so they’re probably even better by now), cool songs – what more do you want? Especially the last song, ‘Gallery Of Darkness’, with its Black Metal references kicks some serious ass and leaves quite a few more popular bands as being second class. Don’t take me wrong: G.O.D. are not a classic must – yet! But I’m sure that if they stick together they can achieve quite a bit. There is only one thing that I don’t like about this album: it’s not even 30 minutes long! But there are no bad songs on here, so let’s try out the repeat button (haven’t done so for a while)! Until their next record this will do, or check out OF TREES AND ORCHIDS as well! gallery.of.darkness@gmx.de, www.gallery-of-darkness.de