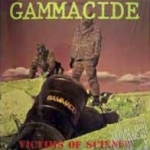 GAMMACIDE strikes back after many years of being buried and forgotten by the underground media. Even, back in the day when they released their sophomore “Victims Of Science” it kind of drifted into obscurity for a simple reason: the early 90s Death Metal boom. The funny thing is that now that they have regrouped they are facing the same situation many other second-coming Thrash-veterans are facing, which is the resurgence of a style that once was their doom: Death Metal! Playing on the safe side this band is offering their debut album (remastered and reissued on CD in 2005) for the youger generations to discover what Thrash Metal was about and also re-introduce the old dinosaurs that still may have their old, trashed vinyl copy laying somewhere between the classics of that era. GAMMACIDE’s delivery on this CD never falls short of pummeling, punishing and actually with a little bit of deathy-beat to the whole thing. For many of us their aggressive Thrash Metal was a perfect introduction to the coming trend back in the day but oddly enough listening that today does not wash away its historic value. This is a mandatory album for any decent Thrash Metal fan into old SLAYER, DARK ANGEL, EXODUS, EXHORDER and similar cult acts of the genre. Really worth to mention is the fact that the package included all four songs from the rare and ultra brutal 1991 demo (way more brutal than the album) plus two tracks that were written sometime in 1992, but never recorded up to now (very promising if this is in the vein of a new album to follow). Contact them at: www.gammacide.com.