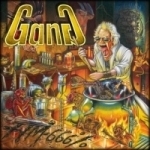 I have always liked this French Metal outfit called GANG pretty much actually. There’s something quite appealing in the band’s mixture of pure Heavy Metal, Thrash, Power Metal and even Hard Rock – and the band’s previous 5th full-length album, simply titled "V", was just all around a good release in my books. But I don’t know whether this new 7-track effort from them, was that necessary to get released after all. I mean, it contains 1 new GANG song called ‘All The Fool Around’, one live song from them (‘Heavy Metal Fever’), plus 5 cover songs from bands like SAXON (‘747 – Strangers In The Night’), SCORPIONS (‘Rock You Like A Hurricane’), BLACK SABBATH (‘Paranoid’), etc. This whole idea of doing a cover song album is so dead and buried already; there are already so many of them released up to this very day that to me it’s kind of pointless to make a cover song album out of some of your most favorite and nostalgic (Metal) songs really. Who do cover albums serve these days expect a handful of some die-hard collectors perhaps? The type of release that "HM-666%" represents, is simply plain waste – and not much more really. And why to cover something like ‘Paranoid’, or even "Rock You Like A Hurricane’ when there’s so much better material available from these two particular bands in question? Makes no sense if asked from me respectively. Excuse me but I really need to go now and wash my hands out of this. Uhm, next please… More about GANG though, at: www.myspace.com/gang51