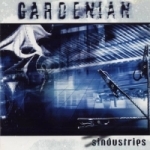 “Sindustries” is the third album of Gothenburg-based GARDENIAN and personally I think it’s neither fish nor fowl. It’s hard to imagine that mastermind Niclas Engelin and his crew will easily please their old fans, because the music on “Sindustries” is neither typical melodic Death Metal like on their debut album “Two Feet Stand” nor an album similar to Power Metal like the second longplayer “Soulburner” was, due to the guest vocals of Eric Hawk (ARTCH). On “Sindustries” you get eleven pretty long-running tracks, which sound very modern and sometimes influenced by the new Metal movement. Here and there are still the typical GARDENIAN trademarks like the fantastic guitar work and a killer production, this time by Peter Tägtgren in Abyss studio. Well, honestly spoken I don’t know what to think about GARDENIAN anno 2000, I guess it’s not my cup of bloodl!