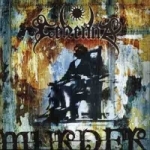 Have shed their atmospheric and ethereal sound of past releases and gone for a more direct, simple and altogether brutal sound, GEHENNA have indeed lost that charm and appeal which made them so damn special in the beginning. Sure, no one can stay the same or stagnate (unless you’re MOTÖRHEAD of course!) but the progression GEHENNA have made from their debut MCD to this point is definitely one that leaves a somewhat sour taste in my mouth. Simply, this is average, US inspired Death Metal with the more than obvious MORBID ANGEL and SLAYER references. Lacking in inspiration is what I would say GEHENNA were when it came to writing and recording this album. Where “Adimiron Black” had the charm and music to actually make it work, without it being a masterpiece of any kind, “Murder” is middle of the road, boring and worst of all, banal. The vocals are quite tiresome, bordering on that Hardcore / Death Metal rasp and the riffs chug along in a repetitive and meandering manner. If only this lot had stuck to their occult tinged sound of yesterday and developed that as opposed to pursuing the same trodden path of virtually all other Black Metal bands over the last few years, they may have grown to be something very special indeed. Sadly, their pouring of Death Metal over Black Metal simply doesn’t make a good tune.