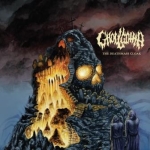 This band from San Diego already caught my attention with their split EP shared with the Italian Doom Deathers INTO DARKNESS. Like them, GHOULGOTHA are one of those new bands that mix Doom and Death Metal in a way of their own. Now, after a two song demo and one and a falf 7”es, it is due time to present the world a full length album of GHOULGOTHA. Needless to say that this album, titled “The Deathmass Cloak”, keeps up the musical direction of these three little releases. In addition, the band added some rather tilted, sometimes even weird elements to their sound. Thus it is no wonder that some of the outstanding songs on this album are rather unusual ones. For example, we find ‘Austere Urns’ with some very freaky breaks in the middle part or ‘Saturnal Rites’, a chunk of cosmic lava spiced with rude fast outbreaks. ‘Cartilage Imperfect’ also has pretty skewed breaks to stop the slow grind. Yet the song I dig most on “The Deathmass Cloak” is ‘Prophetic Oration Of Self’ from the 7” of that name, a pitch black Doom Death monster. Or the opening ‘Gazing Into The Melted Night’, a pretty classic Doom Death song with melody lines close to Gothic Doom. But from what point ever you look at “The Deathmass Cloak” – it is a varied Doom Death feast with a raw and unpolished sound, that twists and turns in unexpected ways. Therefore it is no wonder that the album ends with a hidden track as unusual as the album. Or did anybody expect ‘The Lament Configuration’, a pretty weird cover tune of the all-girl Doom Death band MYTHIC here? Me neither. It’s up to those who dig Doom Death Metal to raise GHOULGOTHA to the peerage. Check the band www.facebook.com/ghoulgotha666 and the label www.darkdescentrecords.com for more.