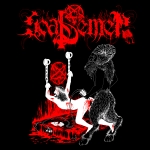 Bringing dungeon-dwelling blasphemy into the hearts of Black / Death Metal fans since 2000, Peru’s GOAT SEMEN are a bloody, abominable force to be reckoned with. With a multitude of splits, demos and live releases since then, GOAT SEMEN have only released one full-length. Having years to perfect their sound, 2015’s "Ego Svm Satanas" is a monstrosity of greatness all its own. And that’s where "Demo 2003" comes into play. "Demo 2003" contains early versions of ‘Madre Muerte’ and ‘Warfare Noise’, the former a murky, sludgy, rapid machine-gun-fire of a track, with the latter a siren-induced, spiraling-guitared, raspy-vocaled miasma. However, the demo begins with a chorus heralding in a song named after the band itself, a pure introduction to the underground aura that is GOAT SEMEN. And the KING DIAMOND influenced high-pitched vocals that make their appearance throughout are always welcome. And does the vocalist actually bark like a demon-dog near the end? ‘Sodom Graves’ is another mess of a track that still delivers in all its beautiful noise. ‘At Luzbel’s Behest’ features vocals that really have no rhyme or reason but deliver a sound much like a screaming behemoth in the pits of hell. The guitars and drums both go in opposite directions at times. Yet it works. The demo is wrapped up with ‘Pachacamak-Oracle Of The Sands’, a 10-minute opus that goes and goes in ever-swirling guitars, classic Metal drums and catacomb-dwelling vocals. Here’s hoping it doesn’t take another 15 years for the next full-length (Dunkelheit Produktionen have just re-released this classic 2003 demo on 180g heavy vinyl with a gatefold sleeve, printed innersleeve, paperbag and an A2 sized poster – Frank). For more information, check out www.facebook.com/goatsemen, www.dunkelheit-produktionen.de