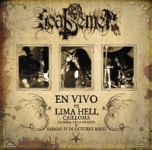 For quite a few years these Peruvian Black Metal terrorists unleashes their extreme Metal to the underground. I still can remember their first steps when they have informed the underground of their debut-demo and when it finally got released. Since that time the band has been featured within pages of all the underground-publications that we all know very well. Here and there some further releases got unleashed, but unfortunately seldom with new stuff. The great double-split LP (in gatefold) with their fellows of ANAL VOMIT didn’t feature anything new as well (besides the live bonus-tracks) and now we have a full live-album here. Some of you may find it unnecessary to have that recording released and even I myself wish this would have been a real album with studio sound and new compositions. But, this CD (what about the vinyl-version?) is a pretty underground jewel and I bet my arse that mainstream followers won’t even recognize that album. Featured are 12 tracks, recorded live in Lima Hell in October 2003. The sound is raw, crude, nasty and evil. Don’t expect a crystal clear sound or perfectly tight instruments. The get-up of the CD is a nice one; the booklet consists of 8 pages that bring everything to the point: METAL DE GUERRA SUD AMERICANO. I don’t think that I have to describe anything further now – if you are a mutant banger you will support that band and buy that album at the end of April (release date: April 28, 2007). www.displeasedrecords.com