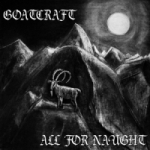 The evil genius of Lonegoat has returned with another set of Necroclassical musical pieces in the form of an official GOATCRAFT debut album titled “All for Naught”. I say pieces instead of tracks due to the music consisting of strictly piano / keyboard concoctions that would seem only fair to be considered piano pieces. Carving its own path by way of 12 arrangements that hit just over 50 minutes and that are very well produced can be found on this record. If you recall a little over a year ago I did a review on the band’s self-titled demo that was released on Pale Horse Records. This time around the band has found a new home with Forbidden Records and has been quickly been getting attention for this much anticipated debut album’s release. For those of you that have not read my previous review or are not familiar with GOATCRAFT, let me give you a quick background on the band. Consisting of only Lonegoat, the music is a piano / keyboard driven onslaught that could easily be described as a mental maze of torment that began in 2010. The music varies from a fast tempo audio decimation to a majestic ambient spell that intrigues the mind. The fact that this music can be easily associated with a horror movie score or used as an intro / outro for a band is what makes it stand out that much more. Lonegoat’s material gets better with each release that I hear (going back to the days of the CD-R demos). ‘Goats Will Riot’ caught my attention with its galloping intro that quickly converts to a flurry crescendo of piano notes then descends into a slower tempo arrangement. A piece that I had not heard since an old CD-R demo and was surprised to see that it made the cut for this debut is ‘Journey To The Depths’. While ‘Journey To The Depths’ is not as extensive in length, it still is an excellent addition to this album as it showcases some of the earlier material. The cover art on this album is pretty cool with an ibex on a mountain top on a full moon night giving a bit of a homage to Black Metal artwork. Walking the fine line between insanity and genius is what I would use to describe this Texas outfit’s music. As interesting as the musical pieces are for this album, it is not for everyone. You will either enjoy it or not due to its lack of accompanying instruments i.e. drums / guitar / vocals, but that sets GOATCRAFT apart from other bands. Catchy and atmospheric well written material is well thought out. My personal favorites on this debut are: ‘Call Me Judas’, ‘Journey To The Depths’, ‘Goats Will Riot’ and ‘The Rape Of Europa’. The official release date is March 20, 2013, but if you head over to Forbidden Records’ website you can stream it to get a glimpse. I highly recommend you check out the music at least once to see if it appeals your senses. For more info: www.goatcraft.net, www.forbidden-records.com