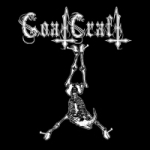 Texas, there must be something in the water in this state for it to spawn such acts as HOD, ABSU, AVERSE SEFIRA, THORNSPAWN, and IMPRECATION. Dark Modern (some may consider it atmospheric Black Metal) classical piano solo act GOATCRAFT is yet another Texas creation and has been making waves since its inception in 2010. Lead by LoneGoat, GOATCRAFT has mostly been a DIY band until recently having a cassette, yes cassette, release by Pale Horse Recordings. This is not your typical band, consisting of only a piano (no vocals, drums, or guitars) the music speaks for itself. Being that it is strictly only piano, people will either be entranced by the music or just flat out not like it. Dark, atmospheric and erratic, yet at times the music is majestic. Join me as we dive into the World of GOATCRAFT. The first track to stand out is track 2 ‘Monarch Of The Goat’, beginning with a Beethoven-esque piece that has a crescendo intro and proceeds into a mid tempo with piano blast beats (if there is such a term in the piano playing world). ‘Exalted Throne Of The Goat’ is a track that I can see being part of a movie score. This piece has a life of its own and leaves room for the listener to want more. ‘The Hooves Of Goat’s’ is yet another track that catches the listener’s ear with intricate piano wizardry. The track that stood out the most for me was ‘Journey To The Depths’, it is just awesome. Something about the track just gives me the idea that this is the track that someone would be listening to just before the poison they drank kicks in. ‘Goats Will Rot’ is a listener’s maze of torment with the erratic piano and doomy beat. ‘Scorned Goat’ is a track that drags the tortured soul through the cosmos as the sense of doom lingers. ‘The Goat That Storms’ is the longest track on this album coming in at just over 13mins. The piece is very atmospheric and has several tempo changes with odd time signatures. An interesting piece that accentuates the talent of LoneGoat. Indeed a track that I think should be checked out by everyone that reads this review. ‘At One With Baphomet’ is just a flat out great track. The evolving door of musical instruments in the world of dark extreme music has a new piano offering in the form of GOATCRAFT, but I can see the music also being used as: intro / outro for other bands, scores for movies, or for video games. The only downside I see to the music is that some tracks are rather short (1 – 2 minutes), but I guess that will only leave you wanting more. An excellent band to check out (especially if you are into classical music or liked era 1 MORTIIS) when you just want to zone out and take a break from the 10000 bpm Death / Black Metal. For more info: infernal_napalm@yahoo.com, www.palehorserecordings.com, www.reverbnation.com/goatcraft