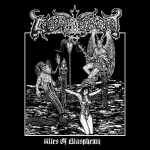 My brother introduced me to GOATTHOAT’s music a few months ago. It’s a general rule that just about any band with the word "Goat" in the title is something I’ll listen to (ARCHGOAT, GOAT SEMEN, GOATBLOOD, SADOGOAT, etc…). But  GOATTHOAT? I’m not even sure what that means other than simply referring to the throat of a goat. But I gave it a listen. And it’s a little different than other goat bands. "Rites Of Blasphemy" is this German band’s first release. The intro ‘Evokation’ is, to be honest, a little too silly (which could be their intention, actually. I mean, they are called GOATTHROAT). But then ‘Drowned In Black Vomit Of The Goat Throat’ kicks in with no apologies. An almost ominous, steady rhythm permeates through my ears. Vocals by Golzarath are buried a little bit, but instill the anguish and pain we all know and love in our Black / Death Metal. The same tempo continues through ‘Howling Winds Of Pestilence And War’, ‘Rites Of Blasphemy’ and ‘Proclaiming The Rise Of The Black Goat’. Actually, the same tempo resonates throughout the whole album. Individually, the songs are headbangable (if that’s a word). However, I feel that each song feels like it jumps right into it, with no real build-up or song changes throughout. But if you’re looking for consistency, this album does have it. And the song titles… ‘Incidents In The Impious Chamber’, ‘Sodomy And Ecstasy’, and the ones listed above… I will say they know how to name their Metal. For more info, check out www.facebook.com/thetruegoatthroat, www.tribulacionproductions.com.