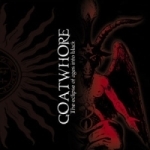 GOATWHORE
The Eclipse Of Ages Into Black
(Rotten Records)
45:52min

Well, this is not a new album, it was in fact recorded 1999, but it deserves attention even three years later. As a side note I can add that in late 2002 / early 2003 there also will be a new GOATWHORE CD, so this review might be a good appetizer for that! The original Black / Death horde GOATWHORE comes from the USA and creates an unique mixture of brutal, hateful Black / Death, like SUMMON, WIND OF THE BLACK MOUNTAINS and dark, melancholic Doom parts that in fact remind me of old ANATHEMA. Sounds strange, huh? I will describe it a bit more detailed now: most songs start off as fast, blasting Black / Death tracks, but get interrupted by a sorrowful almost speaking clean vocalist, whose emotional wailing adds a very sick note to the GOATWHORE sound. The aggressive, possessed screaming dominates, but there are only few songs on “The Eclipse Of Ages Into Black”, where no clean parts appear. The 15 songs on GOATWHORE’s excellent debut profit from the different vocal styles and surprising change between blasting brutality and doomy darkness, they never get boring. On two songs, the great old school tracks ‘Invert The Virgin’ and ‘Perversions Of The Ancient Goat’, there are even some backing growls by Mike Beams of EXHUMED, who adds a little Death Metal / Grind note. I can understand, if someone does not like the clean vocals, they are definitely unusual and GOATWHORE’s original note, but give this CD a try!!! I bought it and I did not expect those clean vocals, but after the second time listening to the CD, I can honestly say, that I really like it!!! It is an intense, sinister and aggressive album, that fascinates for a long time, so if you are into Black / Death with a killer production – be sure to give “The Eclipse Of Ages Into Black” a chance!!!! Band’s website: www.goatwhore.net