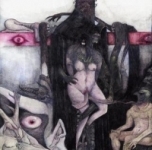 GODLESS’ first full-length "Ecce Homo Post Lux Tenebras, Pulsio XIII Ultima Ratio" is released through Blood Harvest Records. That got my expectations pretty high, because this label has a fine nose for the music that usually sends blizzards through my veins. After two demos and an EP called "Irreligiosus Nemine Discrepante" on Tyrannus Records in 2006, this debut was released on August 11th. Later a gatefold 12" vinyl-version of "Ecce…" will be released. On this one, the band executed a possessed form of Death Metal that reminds very much of INCANTATION ("Onward To Golgotha"), BLOODY SIGN and THE CHASM. On "Ecce Homo Post Lux Tenebras…" the band continues their chosen path from "Irreligiosus Nemine Discrepante" and unleashes hell for 45 minutes in 9 brand new tracks. The tracklisting says 7 tracks, but for some reason this copy got 2 bonus tracks. An ominous intro leads to ‘Sacrobsolescence: Igneus Sigillum Insurrectio’ like a soundtrack of a horrible scene from hell, suitable illustrated by the sick coverart. The production is a bit fuller and comes close to the sound of DEAD CONGREGATION’s "Graves Of The Archangels". The band is twisting and turning, franticly changing tempo plus they’re giving everything and aim for perfection. The drumming is pounding with a lot of blasting. Highly enjoyable by its energy. The riffing ranges from classic to cool but the production kept it in a kind of vacuum. Too much on the background or too much equally levelled to the bass-sound. Vocalist V.D.A. Irrenemidis grunts and screams with a huge Daniel Corchado worshipping. He does a good job but sometimes (like in ‘Nihil Coronat Opus’) his bestiality becomes a bit too much for my taste. Despite these small remarks this is a cool and most of all dark album you should check out. Not great and a bit too monotone, but still good enough to feed the hunger for most part. People who enjoy DENIAL, INCANTATION, IMMOLATION, DEAD CONGREGATION, BLOODY SIGN, THE CHASM, INFINITUM OBSCURE and likes will find satisfaction in this one. Check: www.myspace.com/godlesschile, www.bloodharvest.se for more info.