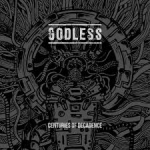 GODLESS is a Death Metal horde from India. And to be honest, this is the first time I’ve heard a band from that country. So, I wasn’t really sure about what to expect after doing my usual research. Well, I was pleasantly surprised. Released by the up and coming (and also Indian based) Transcending Obscurity Records, “Centuries Of Decadence” is their debut EP and it showcases some really solid Death Metal. These 4 songs have a lot of influences. Both, new and old. The mix of Death and Thrash Metal is undeniable. Playing mostly a fast paced combination of said genres, the blast beat parts instantly reminded me of “Domination” era MORBID ANGEL, meanwhile the slow parts have that dense character, where brutality meets groove along heavy as hell mid paced segments. Kaushal LS’ vocals stand right between deep and shouted growls. They are similar in tone to A. Doussaud’s (AD PATRES). The production has a modern twist to it. Thick guitar and bass tone, punchy (and I think triggered drums) and soaring leads. Actually, the leads are one of the highlights here. R. Nidamarthy and R. Nair both share guitar duties and these guys know what they are doing. Catchy and heavy riffs paired with really good and tasty leads. Last, but not least, both A. Razvi (bass) and A. Yadav (drums) provide great performances to tighten up the rhythm base. All in all, GODLESS combine all these influences to come up with their own style: a good modern take on classic Death Metal. Contact the band here: www.facebook.com/godlessindia. And get their EP through their label here: http://transcendingobscurityindia.bandcamp.com