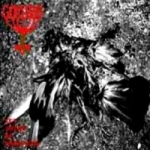 GODLESS is a band / project in activity since 1994 and led by Chris Miumbwa. From what I have understood, Chris had difficulty to gather a proper line-up around him in the past, so I am not too sure if he handles all the instruments on this, but I guess it is probably the case. Musically, GODLESS is connected to the dark Heavy Metal of the 80s, in the MERCYFUL FATE vein if you want, but far less complex. Today, I see one equivalent to GODLESS, and it is MELECHESH. The two bands share the same interest for mysterious atmospheres, Middle-East flavoured moods and occult topics. Even the vocals sounds more or less the same. “Let There Be Darkness” is due to be re-released on a proper label in Fall 2003, this time with a real drummer (in place of the drum machine used here). GODLESS’s music comes out extremely interesting, and brings us a bowl of fresh air, especially if you consider the tons of useless releases which plagues the record bins presently. This album offers seven tracks for a total running time of more than one hour, so you can figure we are dealing with long and epic songs and here precisely lies the weak point of this record. The compositions lacks well marked hooks, so the overall result lacks lustre a little. Maybe Chris will work more on this later, this is my advice to him anyway. Apart from that, “Let There Be Darkness” is obviously a labour of love for Heavy Metal music, and I see Chris more like a Metal fan willing to pay homage to his personal musical Gods than an aspiring professional musician (I don’t think I am wrong assuming this). That can explain the sort of naiveté and freshness you can find in this, the mix of Black Metal, melodic Death Metal (reminiscent of the Gothenburg scene of the beginning of the 90s, especially in the guitar playing) and traditional Heavy Metal working really fine here. I am sure that once this album is revamped a little bit, it will be a real killer. All power to Chris, and the best of luck to him in the future! The scene needs more fellows like him! Contact: godlesstheband@yahoo.gr, webpage: www.godless.info.