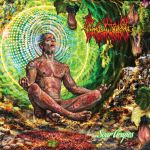 GORATORY’s sound is a mashup of Grindcore and technical Death. The band returns after 16 years with their new release “Sour Grapes” on Everlasting Spew Records. This is an out and out fun record, the influences are plenty and considering the various projects the members are involved in, it’s not a surprise the album sounds the way it does. The band mostly relies on traditional Grindcore riffs and tones. The technical touches zoom past you from time to time, the band however relies on the traditional Grind approaches which is pretty well done. To put the sound into context the riffing is akin to that of WORLD EXTERMINATION, while the drumming is from any of the tracks by SPAWN OF POSSESSION. To me personally, the drumming is the highlight of the entire album. This is neither a new approach nor an entirely new dimension into technical Death Metal that we know and love. It’s just a decent slab of Metal overall. The vocalist overshadows almost always while the rhythm section is firing all cylinders in the background. On the whole, the musicianship on this album checks off all the boxes. No complaints there! It’s a relatively short album, clocking under 30min which is perfect. I cannot pick one track off the album as an absolute standout. As tight as they all sound, their overall songwriting sticks to the blueprint for any band touching the boundaries of the aforementioned genres. If you’re a fan of razor sharp riffs coupled with good drumming or if you just enjoy a good mashup of Grindcore and Death Metal, do check them out. www.facebook.com/officialgoratory, www.facebook.com/everlastingspew