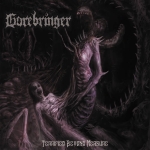 There is a really thin line that divides the melodic Death Metal from Metalcore. The vocals, the riffs and the concepts surrounding the creations of both styles, tend to have some similarities (or the second genre being a copycat from to the first one), without creating something innovative or tunes that depollute the ears of global society. Well, I don’t know about Metalcore / Deathcore (and I hope to never develop my knowledge about it), but with the latest full-length of GOREBRINGER, I have an idea. GOREBRINGER was formed in 2017 in London, England and they released “Terrified Beyond Measure” through French label Great Dane Records, the second full-length for this English act. This production has 8 songs whose lyrical content is gore and the inexistence of the human being. The title of the compositions are in the middle of good concepts and their cover art is great. I listened to this album in a week, like 20 times. I discovered things that I did not know at the beginning of eating it with my ears. I found good things, I like GOREBRINGER. The influence from Swedish AT THE GATES (even some EUCHARIST) and United States of America’s THE BLACK DAHLIA MURDER can be heard in some riffs, vocals and style of drumming. “Terrified Beyond Measure” is a short album, where you can go from melodic Death Metal, to brutal Death Metal, to Power Metal and to GOREBRINGER. What?! Yes, I thought the same. It is kind of a milkshake, that leaves a saturated taste. You need to discover the whole concept of this production. You find it, and you like it. Well, I am going to explain my thinking. In the songs of ‘Man To Beast’ and ‘Terrified Beyond Measure’, the vocals are brutal and well executed, having some sonoric development that made me think of distinct American and European melodic Death Metal bands. The drums are loud and the blasts don’t dissapoint. In ‘The Evil Ones’, GOREBRINGER achieves to reach some bestial drumming and a guitar / bass that has some elements owned by brutal Death Metal. I even thought of SUFFOCATION. On the last part of the album, is where the Power Metal influences appear. The execution of every player is great. ‘Necro Mess’ is a really powerful and great song. Great riffs. Great drums and great bass. Well, GOREBRINGER have their own sound. And it’s a good one, for me. I do not know what they play. The dishonesty gives me diarrhea. More info at: www.facebook.com/gorebringer, www.facebook.com/greatdanerecords