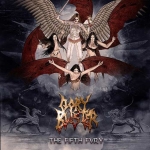 Imagine a mix of, let’s say, NEVERMORE and CANNIBAL CORPSE (Corpsegrinder era) with a huge dose of quality and own input. Sounds promising?! After five tracks in a row none of the built tension was lost and I was hungry for more. The Heavy Metal melodies are mixed with brutal outbursts in a perfectly dosed amount. These dynamics feel natural and what they miss in originality is compensated in variation and technical fills and skills. The tempo is high, but it’s not as fast as countymates HOUR OF PENANCE, for example. In brutality it reminded of the Gothenburg style, but not (too much) with those weak riff-structures which ruin it instantly. I guess "The Fifth Fury” can fill the needs of a wide range of listeners. It’s melodic but not too soft, brutal but not too extreme, varied but not confusing. Besides that, these guys play very tight and the musicianship is far above average. That’s no coincidence because GORY BLISTER is active for more than 20 years already, even though this is my first acquintance with these guys. Their monicker rang a bell, but that’s it. Formed in 1991 they have released four albums prior to "The Fifth Fury”: "Art Bleeds” in 1999, "Skymorphosis” in 2006, "Graveyard Of Angels” in 2009 and "Earth-Sick” in 2012. Before these, they released the demo "Spoilt By Greed” in 1991, the "Hanging Down The Sounds” demo in 1993, and the EP "Cognitive Synergy” in 1997. Everyone earns credits for their part, but guitarist Raff Sangiorgio and drummer Joe la Viola in particular for essential roles. Any weak points? Probably the last two tracks. ‘The Grey Machinery’ is not bad, but less strong than the rest. And the final track ‘Heretic Infected Orchestra’ (bonus track) is instrumental with a lot of keyboards. Even though many songs use keys and with good results, an entire track is probably a love it or hate it matter and in my case it was too much after one and a half minutes. Fans of late CARCASS and technical, brutal yet melodic Death Metal in general should give this a try. "The Fifth Fury” is a suprisingly good abum and can be listed as attender for best of polls in this category this year. For more info check www.goryblister.com, www.facebook.com/goryblister, www.sliptrickrecords.com