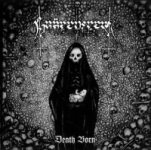 Fast and furious Black Metal with lots of Thrash Metal influences from this German band. This is actually their second full length, and a powerful one if you ask me. The first thing that strikes is the intensity of this recording. The sound of the album, recalls the sound of the MAYHEM debut album, specially the guitars, and to a lesser extent the atmosphere of early DARK FUNERAL. They also use a lot of melodic interludes, but played at a frantic pace, that makes them sound fresh. The Thrash Metal influence comes from their land too, mainly KREATOR, which in songs like ‘Storm Of Maggots’ can be clearly hear. Also, the bass work is very good, doing really a rhythm section to sound like it is supposed and not only following the guitars all the time. Some parts also recall of IMMORTAL, like the song ‘People Has Failed’ with a very intense drumming, which sounds like war march. The band knows how to use some melody here and there, they also know where to use some more Thrash riffs and some furious Black Metal sounds, in a way few bands have tried, and that makes them also interesting. By mixing those elements, they have created something which sounds different but at the same time retains a very dark essence. Yes, some songs tends to sounds a bit alike, but you need to give this one more than a listen to realize that they have created truly a great recording of intense and blasting Black Metal with many Deathrash sounds, and a very interesting performance. This is how I like extreme Metal. It is on my top list for this years and you better run to get this one. Great band. www.blackhate.de