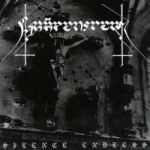 “Silence Endless… Dark Endless – a MARDUK reference in the title?” was my first thought when I received the debut of the German duo GRÄFENSTEIN (its name supposedly taken from a castle ruin even though I found the url of a dog school first). Well, certainly no references to the early sound of that Swedish band – rather the speed from latter efforts may have played a role. The disc kicks off with the fast opener ‘Days Red Dawn’ which recalls the classic Scandinavian school of Black Metal, especially IMMORTAL roughly in their first three albums (at least in my ears). Yet GRÄFENSTEIN do not come across as a mere clone but, well, have a similar charm as the aforementioned band and combine it with some well placed mid tempo parts and breaks. The following songs show a more varied approach and the use of massive headbang-compatible passages from which the band blasts on again, creating a nice balance of fast, raging and slower, dragging parts. I do not really hear that much Thrash elements apart from some riffs here and there (the band refers to its sound as “Black Thrash Metal”) but a good dose of melody blended in. Once again a not that appropriate comparison but the fourth song ‘Vow Of Honour’ carries some DISSECTION similarities in terms of the melody and phrasing. I must say that the production of the whole album was a positive surprise: the guitars sound sharp and dominant enough yet still mainting a thin Black Metal characteristic, the bass is prominent and audible throughout the songs, adding a good dose of punch to the material. Most probably the drums have not been triggered which results in a natural, thundering sound characteristic with slightly “splashy” cymbals. The vocal delivery stays in the usual croaky realms for that style but the generously applied delay adds a haunting note which blends in well, creating a more than decent overall impression. This is not the ultimate release of German Black Metal but a more than solid effort so fans of Black Metal without gimmicks and a slight Thrash note should risk an ear. Despite the comparisons I made earlier GRÄFENSTEIN have their own sound and obviously do not try to follow another band step by step. Band website: www.realm-of-graefenstein.de, label website: www.blackhate.de